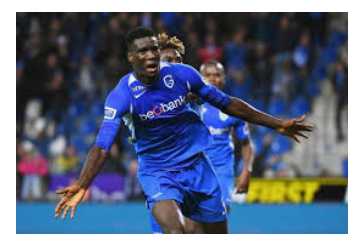 By Olayinka Elebute
Super Eagles and KRC Genk striker, Paul Onuachu has revealed his dream destination after calling it quits with Belgium giants.
The goal king who scored 29 goals in the regular season in Belgium and he is widely expected to quit Genk for a bigger club and league in the summer even though he still has a contract at the Belgian club till 2024.
The giant Genk striker has now said he would be fulfilled to play for Arsenal in the Premier League.
“I really like Arsenal,” Onuachu told Sporza.
“Adebayor, one of the players I admired most, played there. I really was a fan of his, including Kanu. I really love watching Arsenal too.”
KRC Genk are convinced that prolific target man, Paul Onuachu is worth more than €20 million, with the club expressing the intention of making the Nigerian the most expensive outgoing transfers in their history.
The Belgian side acquired the Nigerian finisher for only six million euros two years ago but are only ready to part with his services for a fee never before received. Genk are renowned as a club that acquires players on the cheap, helps them develop over time, and sells them for a significant profit.
It is however still not clear whether the Gunners may be interested in Onuachu who has seen his stock risen massively over the past 12 months.
The ex-Midtjylland star has smashed in 33 goals for club and country, with his latest double in his side’s 3-2 defeat to Antwerp, the 29th league goal this term.
Genk’s Sporting Director Dimitri De Condé admits the club will not stop the 26-yearold from leaving this summer, but it would be on their financial terms.
Share