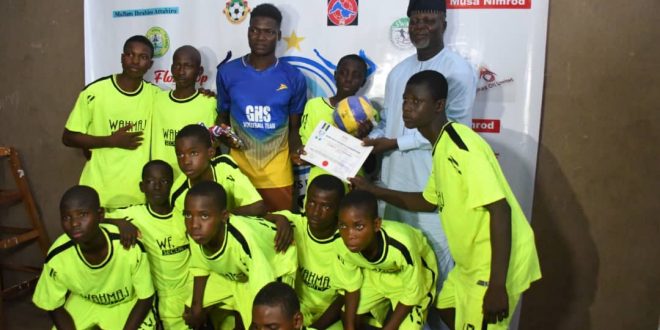 The Chief organiser of the Volleyball competition, Dare Kuti was overly thankful for the successful hosting of the three days events.

The 2019 Nigeria Sports Journalist of the year said, “Appreciation to God who made these possible for us to see a successful ending of the maiden Kwara State Inter Secondary School Volleyball Competition in Ilorin, Kwara State.

“Appreciation also goes to the President of Nigeria Volleyball Federation, Engineer Musa Nimrod for his constant support in ensuring volleyball gets to the nook and cranny of the country.

“Engineer Musa Nimrod, a man who believes in the grassroots inspired me to take a big step by organising the Inter Secondary School Volleyball Competition; without your support I don’t think the competition would have seen the light of the day.

“I want to appreciate everyone that partnered and supported during the competition. To my colleagues in the media industry, you have been wonderful from the first day I conceived the competition till the last day; I do not take your support for granted”, Kuti said.

He called on well meaning Nigeria to come all out to support the growth of the sports in the State.

“As we begin this new phase of taking volleyball to the secondary schools in Kwara State, I am calling on well meaning Nigerians to assist in making this dream a reality”, he concluded.