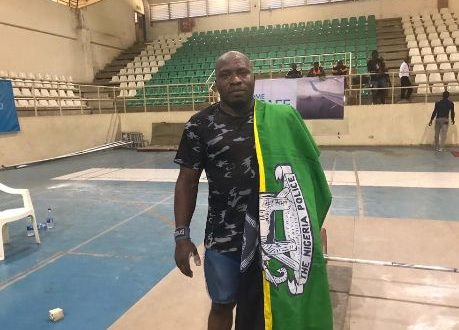 reports that the event held at the Moshood Abiola National Stadium Abuja at the indoor Hall on Sunday, saw the police team claiming 28 gold,four slivers medals for other contestants .

Second placed team on the medals table is the Federal Road Safety Corp ( FRSC), who claimed two gold ,three sliver , while others claimed three sliver each that is Economic Economic and financial crimes commission (EFCC) and Federal Fire Service (FFS).

The FRSC got their gold from 64 kg from female.

Meanwhile,the championship would help in the effort to churn out more sports talent from the Nigeria Military and para military.

Speaking after the match, Maina Akawu, NPF Lagos ,said that I started in a little bit but I finish well. I believed that i will be able to reach 110kg.

“ It’s not easy when you attempt. You will get the technique but you will be scared. We are two in the categories 61 kg and I defeated him to take the gold.

“We need more competitors to participate, this will fine tune the atmosphere ,” he said.

On her part,Chinonso Anuebunwe, NPF athlete,said am glad, I am have really improve in my skills. I started lifting with 81 kg categories and I snatch 110kg.

“ I have been playing this game for past seven years but I always won gold and am proud of my progress. I have played in all African games and OSOM .I won gold medals now.

“ I pray that Nigeria should just support us one on one because weightlifting is not a easy game to play,” she said l.

Raphael Adefemi, NPF team Lagos state said that’s they need more competitors and this will help out and I also won the last edition of OSOM.

“ I am impressed. I started from 81kg and I was able to snatch 110 kg weightlifters,” he said.

On her side, Janet Ali, the announcer of weightlifting OSOM game, she said that the athletes that perform are in high spirit of sportsmanship.

“ The only thing observed is that the Nigeria Security and Civil Defence Corp (NSCDC ) they pull out of the competition.

She said “ As far as weightlifting is concerned, we abide by the international standard.we do not go below it .and from all indications the athletes did well and they are all happy about the game.

“The police took overall in the competition and of course any one that is fully prepared must come out victory.They trained their athletes If others agencies can do the same the competition will go a longer way.

“ They need to set up another rules governing this OSOM. So that other agency that didn’t participating will know the worth of why they ought to be there ,” she said.

A total of 11 participants participate, five females and six male for weightlifters.

Previous TIG We Organise More Competition To Prepare Gymnastics
Next OSOM Games : We Have Discovered Some Athletes —AFN