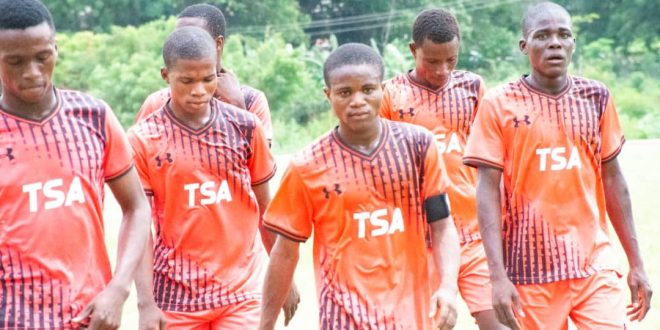 The Consultant of Thomas Adewunmi International College Football Academy of Kwara, Mr. Sogo Shodunnke has said the dream of the school is to see their products play in the European and  UEFA leagues in the next 3 to 6 years.

He said the Academy which was started 4 years ago is going through the formative stage that will see them become a hallmark name among the football academies in the country.

Shodunnke explained this has been proven after his players played a 3-3 draw with the national U-17 team the Golden Eaglets who are already in Ghana for the WAFU Group B finals which will serve as qualifier for the Africa Youth Soccer championship later on in the year.

He said though it is a privilege to play the Golden Eaglets a draw, the boys have proven their investment on them is not a waste.

“They have been playing together for 4 years. Their fitness level, nutrition and physical fitness have always been taken care of hence we are not surprise with their performance.

Our aim is to see them showcase their talents and play at the international stage to the extend of representing the country at various age level competitions.

The Academy is young but we believe with the friendly against the national team we can gain one or two teams from it,” the Nelson Mandela and University of CSKA Moscow graduate explained.

He said he is determined to transfer all he learnt from all these teams in Russia and South Africa on to the boys.

Also speaking on the Academy, the Proprietor, Engineer Babatunde Adewunmi said they are also trying to bring a lot of partnership from places from abroad to further give the school a boost.

“We have started negotiation with some partners in Ghana and some Academies abroad on how we can exchange programmes to further grow the school,” he said.

He said the Golden Eaglets is a formidable team and was optimistic they will do the country proud at the WAFU competition in Ghana and go on to represent the continent at the junior World Cup.

“We want them to have a feel of what is going on at the national team and that is why we brought them to play against the Golden Eaglets,” he concluded.