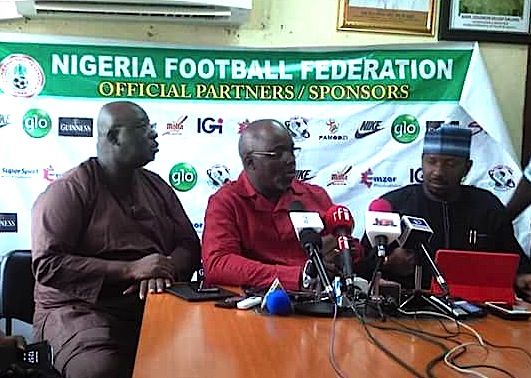 *Ambition kills him as he threatens Falcons stars

*Wants to railroad Congress to ratify so many errors

One man whose name translates to unending controversy is the factional President of the Nigeria Football Federation (NFF), Amaju Pinnick, who like a drunk soldier is fighting several battles at the same time and has lost focus of the primary responsibility he is supposed to deliver.

The word ‘embattled’ has no meaning in the dictionary in describing him now. He has woefully failed in the management of the NFF, he is reported to be on cold war with his Secretary General, Dr Mohammed Sanusi. He is at war with cadets of the various women national teams, the U-17 and U-20, as well as, the Super Falcons.

He opened a new flank making his most trusted and dependable ally, Barrister Christopher Green, to rise against him. Yet, he is suffocating under the fear of the ruling of the Supreme Court in the protracted leadership issue with Ambassador Chris Giwa.

Unusual ambition and lack of respect for his Board: From time immemorial, he had never had respect for his Board members who he sees as pawns on his chess board. He takes unilateral decisions without consulting them. They’ve been covering him to pretend all things are well.

When the media revelations hit the waves exposing the secret moves of the President of the body, Amaju Pinnick, has picked up form to contest for a seat in the Executive Committee of the Confederation of African Football (CAF) without their knowledge and consent, the members felt betrayed.

Technical Committee Chairman of the NFF, Barrister Chris Green, said in a media chat reported from his base in Port Harcourt, that it was with shock that other members of the Executive Committee of the NFF received Pinnick’s plan to contest for a CAF Executive Committee seat as it was not discussed at any of their meetings as has been the case in the past.
Green was quoted to have said: “how come no member is aware? Even as we know that some lilly-livered members will say otherwise. We must be careful not to put the cart before the horse.”

As it was in the past: Green declared: “when Alhaji Aminu Maigari wanted to contest, he was cleared by the federation, the Sports Ministry vide the Federal Government. The same process was also applied when Alhaji Ibrahim Galadima wanted a seat in CAF, pronto for Dr. Amos Adamu. Even when Chief Segun Odegbami and Dr. Orji Uzor Kalu sought to contest FIFA seat, they passed through similar processes. So nobody is permitted to jump the gun.”

Green said he has consulted widely and members of the NFF were unanimous that at a time like this, when the body is in dire financial straits, what they need is not politics to develop African football, but politics to make Nigerian football self sufficient and well funded.

Executive Committee is undermined by Pinnick: He said: “We cannot let one of our best brains if not the best to go and serve CAF when we need him here back home to make our system better than we met it. Moreover, we are cruising now in the bid to be at the Russia 2018 World Cup and we must be united to avoid unnecessary distortion from outsiders.”

Green said himself and other stakeholders represent a constituency, which they report to regularly and no two people as represented by the President and General Secretary can take decisions without due consultation.

He said: “We cannot be undermined and in some of these cases, the government might through us decide to draft an outsider as Nigeria’s candidate and we must follow suit, so I will advice that we thread softly.”

Pinnick dragged before Dalung: When it seemed like the recalcitrant Pinnick won’t listen to the voice of his friends calling forth the signals of danger ahead, the NFF board which he heads has petitioned the Federal Government.

The petition, copy which was sighted by www.gongnews.net was routed through the sports minister earlier on Friday, said such ambition by the president of the federation was ill timed and would work against the collective interest of the country. In the petition the board member explained to the government, why the embattled president should not be given the nod.

Meanwhile the president who did not consult with members of the NFF executive before declaring his intention as the anointed candidate for the continental seat, has moved in swifty to pacify the members by sending them memos on his intention, which most of the board members now see as a belated effort,” said another source within the Executive Committee.

Pinnick’s lies exposed in the market: The board members were of the view that the NFF boss lied when he told the people that he was the popular choice of the federation. It was also gathered that he has employed the service of some influential sports administrators in the country to talk to the NFF Executive Committee members who are not in favour of his ambition.

Whereas, Pinnick, according to a source close to him, is obviously overwhelmed with the NFF job which has taken its heavy toll on him. He had thought if he can get the CAF seat, he would use that window to jet out of the ‘hottest seat in Nigeria’ as he described it to his friend.

Super Falcons: He has listed eight members of the Super Falcons which he intended to make the Annual General Assembly (AGA), a rubber stamp legislative arm of the body, to agree to give a ban from the national teams. Some of the officials, especially coaches, were listed on that ban list. He has started to scout for a foreigner he will employ to tinker with a new women national team.

The Annual General Assembly (AGA) was supposed to adopt a communiqué which has already been written and taken to him to approve also hit at the Supreme Court to desist from taking the decision that can work against the interests of the nation. The Super Eagles’ topping of the log in the group was supposed to be played up.

It would be recalled that the protracted legal battle over the leadership of the NFF is at the Supreme Court waiting for a decision. The legal team of the NFF is reported to have advised the resolution of that matter through a non judicial route which the leadership as represented by Pinnick objected because “I and Giwa will never sit to discuss football on the same table in this life.”

Nigeria's most authoritative online newspaper with a deep reach for the Defence of the truth at all times.
Previous Super Falcons: SERAP drags FG, NFF to UN
Next Concession speech: We must protect the Ghanaian interest first – Mahama