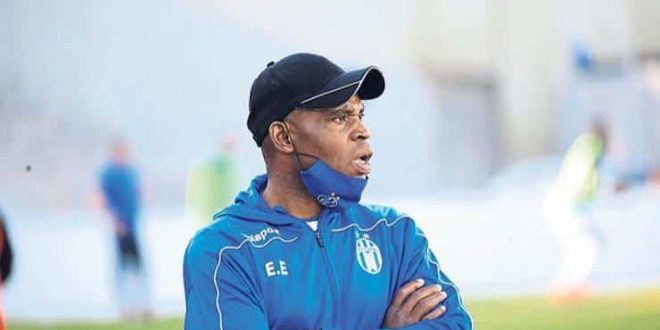 Nigerian Ndubuisi Egbo hopes of managing KF Tirana in the Champions League group stage next season came to an end after his side were beaten at home by Red Star Belgrade in the second round of qualifying.

Egbo made history recently when he became the first African manager to lead a European team to a top-flight title. The 47-year-old led Tirana to the Albanian first division title.

After his record-breaking feat, Egbo once again made history as he became the first African manager to manage a European side in the UEFA Champions League.

It continued to get better for the former Super Eagles goalkeeper as his Tirana side defeated Dinamo Tiblisi 2-0 in the first round of qualifying.

Their reward for beating Dinamo was a home clash against Red Star in the second round of qualifying. But despite the advantage of playing at home, Tirana’s Champions League hopes ended at the hands of the Serbian side.

A Tomane header in the 62nd minute was enough for Red Star to move into the next stage at the expense of Tirana.

Following their loss, Tirana moves into the Europa League third qualification round, and a win would take them closer to the group stages.

Previous CAF CL SLOT: RIVERS UNITED LOSE OUT AS NFF ENDORSES TABLE
Next SUNDAY DARE 365 DAYS IN OFFICE: MUCH ADO ABOUT NOTHING