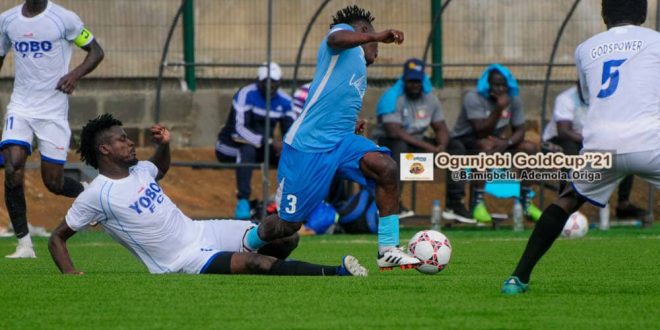 By Editor
Remo Stars have set-up a tough semi-final clash with Niger Tornadoes in the ongoing Ogunjobi Gold Cup holding in Ikenne and Sagamu.
It’s the 7th time the Sky Blues Stars were making it to the last four stage in the nation’s first pre-season tournament. The clash of the two gladiators will be staged at the Remo Stars Stadium on Thursday morning (8am).
Remo Stars who became the only team to win all its Group B did so comfortably after they piped MFM FC by a lone goal and put two goals past FC Yobo. 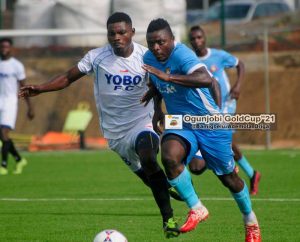 In their last game against the Nationwide League One (NLO) team, the first real chance came to the Sky Blues Stars in the 21st minute after Qudus Akani was hacked down by an FC Yobo defender less than an inch away from the box.
It was a close shave for goalkeeper Stanley Ihebueme, as Nduka Junior’s effort from the free-kick went wide from the side goalpost.
Six minutes later, Remo Stars should have been one-goal up with another big chance for Nduka but his flicks with his head from a free-kick go off the woodwork.
At the half-hour mark, FC Yobo could have taken the lead but goalkeeper Bankole Kayode made a sharp reflex save via a free-kick from Ibrahim Abideen.
Remo Stars then got the reward for their hard work in the 43rd minute following a delight  flick from Michael Osoata inside FC Yobo’s box.
The Sky Blues Stars earned much of the ball possession in the second half and in the 66th minute got their second goal.
FC Yobo defence was punished for its schoolboy defending in the box after Tolulope Ojo got past his marker to nod in Remo Stars winning goal.
Share