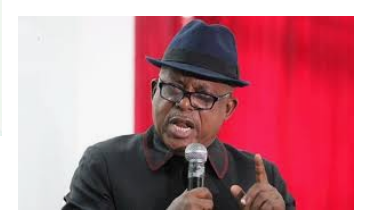 Restrains Him From Convening Meetings

Editor1 September 11, 2021 Sports Comments Off on Restrains Him From Convening Meetings 151 Views

The court presided over by Justice Okugbelem Ggasam in his judgement on Friday relied on the suspension of Ward 5 in Andoni local government area of the State brought by some aggrieved members of the PDP, Ibeawuchi Ernest Alex and four others against Secondus and the PDP.

Justice Gbasam also uphold the prayers of the aggrieved PDP members to retrain, suspend, Uche Secondus from attending, conveying PDP meetings in his capacity as National chairman or member of the party

Counsel to Uche Secondus expressed dissatisfaction against the ruling, noting that his client will appeal the judgement.