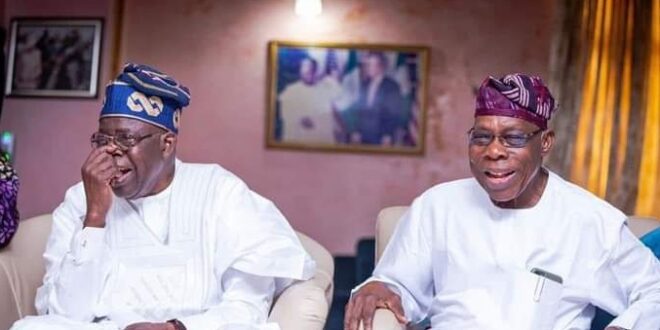 Tinubu visited Obasanjo in company of the Speaker of the House of Representatives, Femi Gbaajabiamila, Chief Bisi Akande and Nuhu Ribadu.

At about 1pm when Tinubu’s chopper landed within the OOPL, he was received by Governor Dapo Abiodun of Ogun State, former Governors Segun Osoba and Gbenga Daniel, Speaker of the House of Assembly, Olakunle Oluomo and other top government functionaries.

At about 1:20pm, Tinubu and his entourage went into Obasanjo’s residence to meet their host.

According to Daily Post, An inside source said that the former Lagos State Governor, Abiodun, Gbajabiamila, Osoba, Akande, Ribadu and others first held a meeting with the Balogun Owu behind closed doors.

After about an hour, the former President pulled Tinubu and they both went into a private room for another meeting.

It was gathered that the duo had a private discussion not known to any of those who went in with the APC national leader.

Tinubu later had lunch at Obasanjo’s place before he departed after about two hours.

When he was accosted by pressmen downstairs, the presidential candidate refused to grant an interview as he ‘hopped’ into the waiting bus that conveyed him to the MKO Abiola Stadium.

Addressing artisans and APC faithful at the MKO Abiola Stadium, Tinubu said he was not in Ogun State for campaign.

He said: “We love what the governor is doing and we are glad with all the support you have given him. Campaign has not started yet, I’m just here to greet you. Thank you and God bless you. God bless Ogun state, God bless Nigeria, God bless your children. Thank you.” he concluded.