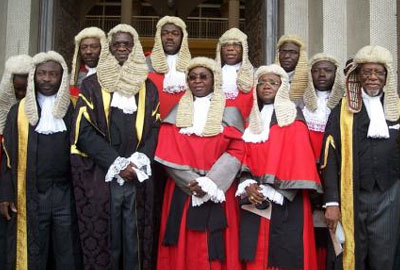 Nigerian judges...some of them are standing trial for corruption issues

The council also resolved to issue a letter of strong warning to Justice D. O. Oluwayemi of Lagos State Judiciary for granting an Ex-parte Order in Suit No: LD/2393LMW/16, relying on an Affidavit of urgency which disclosed no threat of destruction of rights, or interest, in the subject matter of the dispute without putting the other party on notice.

Also, another letter of warning will be issued by the Council to Justice M. A. Savage of High Court of Lagos State, for holding discussion with Complainant’s Counsel in Suit No: LD/179/2000 which he had judicially acted upon, and for serving as a bridge between him and the other party’s Counsel.

The council recommended the dismissal of Ononogbo to the Governor of Abia State, pursuant to the findings that the judge made a blanket order for the payment of unascertained amount as Estate fee from the Access Bank Account of late Chief Dike Udensi Ifegwu to the Probate Registrar of the High Court.

The Assistant Chief Registrar, Probate Division of the Court, Mr. Udeka U. C., was said to have altered the Order of the Hon. Judge in a letter to Access Bank requesting the bank to release the sum of N200 million only into the personal account of E. M. Ojiako, counsel to the Applicant in the suit.

Nigeria's most authoritative online newspaper with a deep reach for the Defence of the truth at all times.
Previous FG releases monies for Falcons, Eagles allowances
Next Rangers may scuttle Chisom Egbuchulam’s trip to Etoile Du Sahel