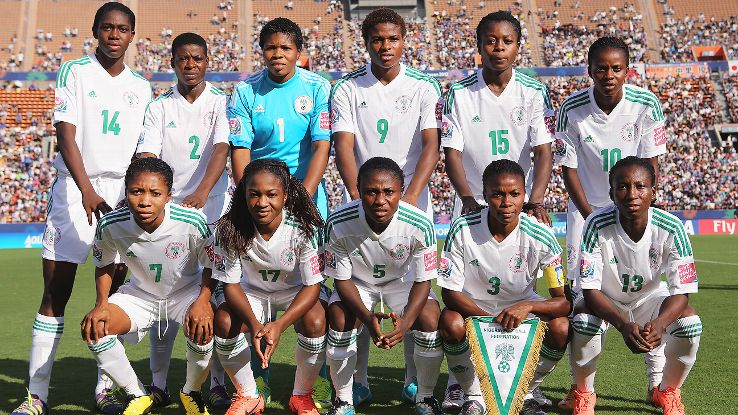 Super Falcons of Nigeria...forced to do another protest over allowances

Super Falcons players have been enmeshed in a long drama about the payment of their match bonuses and allowances by the shameless and bankrupt Nigeria Football Federation. The players have threatened to hold onto the African Women Cup of Nations trophy they won last Saturday despite threats from the factional President, Amaju Pinnick.

The players were tricked out of Cameroon with a promise to pay them when they return to the country on Sunday after claiming their eighth AWCON title.

Officials of the soccer federation did not even show up at the Agura Hotel, Abuja where they lodged the team on the said day let alone bring the players their money.

Things almost got out of hand when the NFF factional President, Amaju Pinnick, eventually visited the team and told them that there was no money to pay.

The meeting almost ended in fiasco as the players vowed to remain at the hotel until their money is paid. They were reported to have held unto the trophy they won and vowed not to release it until they are paid.

The NFF General Secretary, Dr. Mohammed Sanusi, who earlier visited the team, begged them to be patient with the bankrupt organisation. He attempted to give them N50,000 each as transport fare which they flatly rejected.

When www.gongnews.net called sme players of the team to confirm the news, several sources said, “we are aware of what happened to the U-17 and U-20 female teams who left with empty promises and we do not want to have the same experience.

In a statement released by the federation, Sanusi was quoted to have said at the meeting that: “I have come to appeal to you, to understand the situation of the federation and the country at the moment and exercise patience.

“We will pay you all monies you are being owed as soon as we receive money from the Federal Government, just as we paid the U-17 boys who won the FIFA U-17 World Cup in Chile last year, after the tournament.

And just as we sorted out coach Samson Siasia’s wages as soon as we had the funds, after the Olympics.”

He added that: “We know we have financial commitment to you (players and officials of Super Falcons) and we have not at any time stated otherwise. But the money is not readily available at the moment.”

Permanent insolvency: Amaju Pinnick since his purported election has led the NFF into perpetual insolvency. They owe players and coaches with reckless account. No coach in the employ of the organisation is not owed including late coaches Stephen Keshi and Shaibu Amodu.

The Federation is even their owing staffers, players, coaches, hoteliers and travel agents.

Even Super Eagles players are presently being owed match bonuses against Tanzania, Zambia and Algeria.

Nigeria's most authoritative online newspaper with a deep reach for the Defence of the truth at all times.
Previous Olympic Fund: Nigeria’s glorious future in sports is guaranteed -Mark
Next Oyo, Kwara in line to host Gold Cup 2017