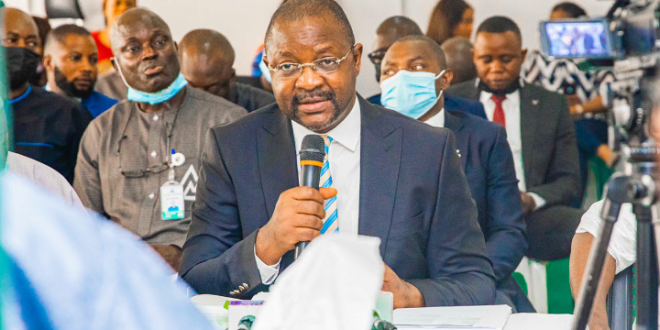 The Honourable Minister of Sports and Youth Development is expected to declare open the 2021 edition of annual Week of the Sports Writers Association of Nigeria, Oyo State Chapter in Ibadan.

The 2021 SWAN will hold between 13th and 17th of December 2021 and will feature various programmes including a lecture titled *’Taking Nigeria Sports to the Next Level Through School Sports Reform’* to be delivered by the President, School Sports Federation Mrs Olabisi Joseph, as well as table tennis tournament, five -a- side football competition and a dinner/award nite.

A press statement, issued by Oyo SWAN Chairman, Niyi Alebiosu and the Association’s Secretary, Adewale Tijani, revealed that the 2021 Oyo SWAN Week would be declared open by Mr Sunday Dare on Monday, 13th of December at the NUJ Press Centre Iyaganku Ibadan.

The press release also hinted that the minister would be conferred with an award of honour at the event in appreciation of his valuable contributions to the development of Sports in Nigeria.

According to Mr Niyi Alebiosu, Mr Dare will be the first Sports Minister of the Federal Republic of Nigeria to receive such honour from Oyo SWAN.

Mr Alebiosu further disclosed that an Agropreneur Chief Eyiolawi of Titan Farms would be made the Patron of the Association of Sports Writers in the state at the grand finale of Oyo SWAN Week on the 17th of December 2021.