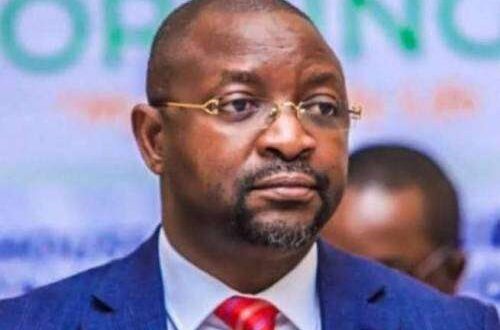 Editor1 September 25, 2022 Sports Comments Off on Sunday Dare At It Again As Sports Minister’s Desperation To Manipulate The NFF Election Becomes Obvious 22 Views

The Minister Of Youth and Sports Development, Mr. Sunday Dare is hell bent on destroying the existing system of Nigerian football with his recent actions as we approach the day of the forthcoming NFF election.  To start with, Mr. Sunday Dare is not finding it easy as all his efforts to have his way in order to manipulate the NFF election  failed.

The Minister has worked towards anointing his preferred candidate which didn’t see light of the day. Another avenue Sunday Dare exploited is entertaining a group of  touts and enemies of Nigerian football called PFAN with the aim of stopping the  electioneering process of a new NFF administration from  emerging.  PFAN is a  body  of disgruntled and so called ex internationals whom you  hardly  trace what their  achievement in Nigerian Football is .  But here we are , having a sports minister entertaining such unrecognised group and disgruntled set of people.

Sometimes last week, another group of unpatriotic citizens threatened to bomb the venue of the  elective congress slated for 30th of September in Benin City.

Like seriously, this action alone  of acknowledging a letter of such magnitude is a enough for the  President of the Federal Republic of Nigeria to fire the minister.  In some of the  interviews, Mr. Dare  granted,  the sports minister keep retreating the constitution of the Federal Republic of Nigeria is supreme.Yes Hon.
Minister, you’re absolutely right but someone should please remind Sunday Dare that for a country be part of an international organisation, some certain conditions must be met in  which a nation must abide by before its incorporation.  In a nutshell, for Nigeria to be part of an organisation such as  UN, ILO, FIFA, CAF, and etc, our dear nation must cede some of its powers which is  why Nigeria is affiliated to FIFA and CAF in football terms.  This is just a refresher incase Mr. Dare has forgotten.

Now to the forthcoming NFF election, a letter has been in circulation signed by the permanent  secretary of the  ministry of youth and sports on behalf of Mr. Sunday Dare who has  summoned the 11 NFF Presidential aspirants to a meeting at his Moshood Abiola Stadium office on Monday. At this juncture it is pertinent to know that, the NFF electoral committee is the only body vested with the  powers to summon all aspirants vying for different seats in the forthcoming elective congress.

There are also reports that in his desperate attempt to have his way into the  electioneering process, Mr. Sunday Dare want a change of venue and date for the elective congress.  By this single act, if all these turned out to be true, Mr. Sunday Dare will go into the history books as arguably the worst sports minister in recent times who turned a blind eye to a smooth transitional process basically because his wish won’t materialise.

Crisis in Nigerian Football after every four years right from 2006 to date has become a norm but one thing is certain, election always take place. With the Minister’s body language, Sunday Dare is reluctant in supervising the September 30th election due to an  existing court injuction by a group not recognised by any organisation home or abroad.

Lastly, Mr. Sunday Dare should also take note of the fact that his actions are capable of kicking our U17 girls out of the FIFA U17 Women’s world cup that  are battle ready to prove a point and showcase the stuff they are made of. It is necessary for all stakeholders at this point in time to rally round and put a stop to Sunday Dare as the Minister is on the verge of setting a terrible precedence