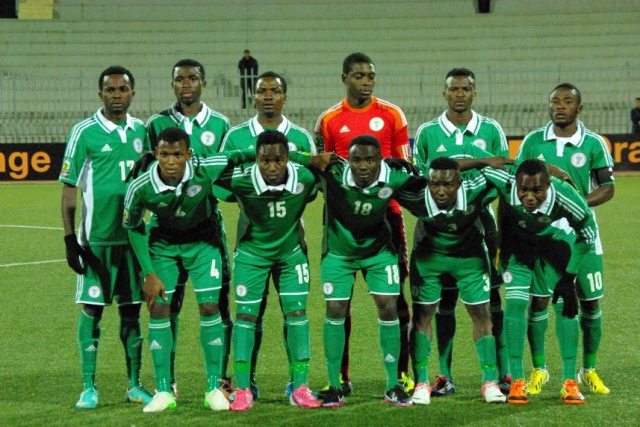 Eaglets...they were used to make money and dumped

Nigeria Football Federation was paid $110,000 as appearance fee for the Suwon International U-19 tournament in South Korea but officials are claiming it was only return tickets and accommodation they got from the organisers. This is a fat lie!

From the history of tournaments in that region and for the integrity of the nation, no nation will be stupid to just carry their players for the fun to a tourney where only tickets and accommodation were provided by the organisers. Who fed the players and who is paying them camp allowance and such other sundry fees?

Nigeria was represented at the tournament by the core of the U-17 players that failed to qualify for next year’s U-17 African Cup of Nations in Madagascar.

From our checks, it is clear that the bankrupt NFF officials actually received the appearance fee from the organisers as well as return tickets for the team. The organisers were also responsible for the accommodation and feeding of the team.

The team lost all its three matches at the competition – 8-1 to England, 1-0 to Iran and 3-0 to hosts Korea – to finish bottom of the table at the tourney. This is the worst ever result returned by a Nigerian team ever since we have been appearing in South Korean friendlies.

On arrival, the NFF paid the players N5,000 each as transport fare back to their bases, while the team officials were paid N10,000 and the head coach, Manu Garba, N20,000. “I don’t really understand what is going on at the federation, because what they used the money for I don’t know,” the source said.

“With such amount of money, even if it was $1,000 each, I am sure the boys would have been happy going back home but so unfortunate that these people are so insensitive to the plight of these small boys.

“When you tell them to go home with N5,000 from Abuja, the money might not even be enough for some of them to get to their homes.”

Alternative sources quoted the General Secretary of that faction of the NFF, Dr. Muhammed Sanusi, who denied the report that the federation was paid any appearance fee. Sanusi said the organisers only provided flight tickets, accommodation and local transportation for the team.

He was quoted to have said: “there was nothing like appearance fee from the organisers, only tickets and accommodation for the contingents. There was supposed to be prize money for each team that participated with the last team receiving $10,000.

“Our team finished last at the competition and was entitled to the $10,000 but we are yet to get the money. Anytime the money arrive, the players will share it among themselves because it is their money.”

The 2016 Suwon tournament: The self-inflicted disaster for Nigerian football occurred as the nation’s U-17 male team suffered their worst defeat in history, losing 8-1 to an ordinary England team at the Suwon Continental Cup tournament.

The team tutored by Coach Manu Garba. It was after collecting appearance fees money from the organisers of the Suwon International tournament, the NFF called on Coach Garba, who hurriedly assembled players from various clubs in the country for the tourney in South Korea. The coach does not even know the players. The barely know each other before going on the trip. This alone is a scandal!

Without any form of preparation, Garba, nine other officials of the NFF and 19 players embarked on the journey to South Korea.

In their first match, the Nigerians were no match for their better organised but average English counterparts, who ran riot from the start till end of the game. Though, it is an invitational tournament, it is on record that England has defeated Nigeria 8-1 in a football tournament!

In the English team was Dominic Solanke, who led several other players with Nigerian roots to trounce a helpless Nigeria U-17 team 8-1. Some Nigerians in the England squad include Ademola Lookman, Ovie Ejaria, Fikayo Tomori and Josh Onomah.

The English team is using the Suwon International tournament to prepare for the FIFA U-20 World Cup in Korea in the summer. Their Nigerian counterparts, Flying Eagles, will not be in the World Cup, as the coach Emmanuel Amuneke led team were bundled out of the 2017 African U-20 Championship by 10-man Sudanese squad in Lagos earlier this year. No Nigerian male team, including the Super Eagles will feature in any continental assignment next year.

Posers: In the Suwon tourneys, all nation’s are paid appearance fees. That puts paid to the lie of Amaju Pinick’s Secretary General, Mohammed Sanusi, that his faction of the NFF did not collect appearance fees.

In the scandalous 8-1 saga, the NFF couldn’t hammer Manu Garba because the coach was picked to just string any manner of players together without preparation. The NFF was not bothered about the nation’s image so long as the money was correct.

Even at that, how much were the players in that tourney paid. Our checks showed they were paid in Naira and not in Dollars being the denomination the organisers paid. Or were the organisers so benevolent to have paid the NFF in Naira? With precedents to show, why is the 2016 story different?

Sanusi who has a grim penchance for lying was involved in match fixing scandal towards the 2010 World Cup, which FIFA, helped their Nigerian friends to kill the report. He was caught on tape to have lied. As usual, his ‘new’ lie does not convince any football fan.

Nigeria and Suwon tourney: Before the coming of the Amaju Pinnick faction of the NFF, the Suwon tourney which used to take place in Suwon World Cup Stadium in Suwon, Gyeonggi Province was usually a tourney to help qualifiers for the Olympics to test the waters before the main event. This event used to be the curtain raiser for the Olympics.

South Korea, making their eighth consecutive Olympic appearance in Rio had always brought teams which has always qualified to Suwon to help them prepare their own team before their own crowd. Ever since has that tourney been a regular face in the calendar of international football. It is a quadrennial tourney.

South Korea had a bronze medal in London 2012 which was the country’s first-ever medal in Olympic football.

Until suddenly, when the Pinnick board came, we were always attending Suwon backyard events so long as there is appearance fee. Given also that the NFF is used to shrouding all such deals in secrecy. Such appearance fees has never appeared in their accounting books for years immemorial.

Nigeria's most authoritative online newspaper with a deep reach for the Defence of the truth at all times.
Previous Athletics: No third term for me – Solomon Ogba
Next Nigeria Olympic Fund: Dalung, Permanent Secretary disagrees publicly