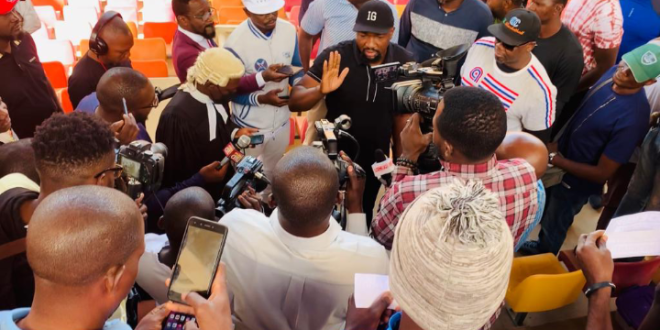 Mark Igoche has been elected as the new President of the Nigeria Basketball Federation (NBBF).

The election which was held at the package A of the Moshood Abiola National Stadium, Igoche  emerged President after he polled 11 votes at the Elective Congress of the NBBF in Abuja

According to Federal Ministry of Youth and Sports directive,  Igoche and Osita Nwachukwu have been elected as president and Vice President of the Nigeria Basketball Federation NBBF respectively.

The chairman of the electorial committee
Suleman Muhammed and vice chairman of the FCT Basketball Association said he was pleased that the election was free and fair in line with the Sports Ministry’s directive.

The newly elected president Igoche said players welfare will be his first priority to him and to give them a better assurance in the future and to make them better of in the sport.

“It is the right time that we need to do things right,  we are going to resist anything or any power from outside that will derail or stop basketball development in Nigeria.

“Players have been bearing the burden of what has been going on, now they haven’t played for so long, most of them are out of shape and looking for other things to do.

“I think it is high time we stop toying with people’s destiny and taking this young boys and girls for granted because the effect of what is going on is that we are destroying lives, it will not in anyway try to help them.

He said players have been denied the opportunity to play the game for some years in the country.

“They (players) want to play basketball and they are been denied the opportunities to practice, so it is high time we look beyond today and our stomach infrastructure.

“Let us put aside our personal interest, let’s think and remember what we can do not to take away the future of this boys and girls from them,” he said

On his part ,the newly elected vice president , Osita Nwachukwu, said he is ready to work with Igoche to develop the sports in the country.

“Igoche have passion and love the game and he has been investing in the sports for years, this is the right we need to support him and the sport a new face in the country.

Stanley Gamut, the athlete representative of the Federation said, athletes will work with Igoche to achieve his goal in the sports.

“We (the athletes) are are ready to give him total support to achieve his purpose in the development of the sport in Nigeria. 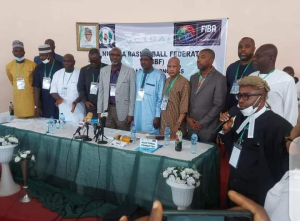 Meanwhile, Engr Ahmadu Musa Kida was returned as the President of the Nigeria Basketball Federation unanimously polling 37 votes at the Elective Congress that took place in Benin City.

In the race for the Vice Presidency, Ogunade garnered 30 votes while Oyedeji got 7 votes with 28 states out of 37 states present at the congress monitored by FIBA ably represented by Ahmed Elhariri (President of FIBA Zone 5 and member, FIBA Central Board) and Nigeria Olympic Committee’ represented by its second Vice President, Engr Ishaku Tikon.

Anambra State Basketball Association Chairman, Ugo Udezue was voted in as the South East representative on the board while Alhaji Abba Kaka got the nod of the North East zone representatives.

In his acceptance speech, Kida thanked the delegates for the confidence reposed in him which is a challenge to do more after a successful first term in office

“I thank you for the confidence reposed in me by your vote and my acceptance to continue to serve, I am in no doubt that the task ahead will be simple. However, no task is insurmountable if we put our minds to it and forge ahead together”.

He seized the opportunity to call on all stakeholders to join hands with the new NBBF board to move the game to greater heights.

“I assure you of our unflinching dedication as we hope to carry everyone along”.

“Regarding this electoral process, there is no Victor and no Vanquished. I am glad that this election was concluded without rancor and in the true spirit of sportsmanship. The only victor is Nigerian basketball”

He called on all aggrieved stakeholders to sheath their sword as the board is opened to meeting everybody with genuine questions and contributions to enable the sport move in the right direction.

The list those elected on the two sides àre listed below

And the questions now is  what’s next for Nigeria Basketball?

Previous Your Health Is Your Vehicle To Life
Next ICRC Seek Cooperation With Nigeria In Resolving 24,000 Request Of Missing Persons