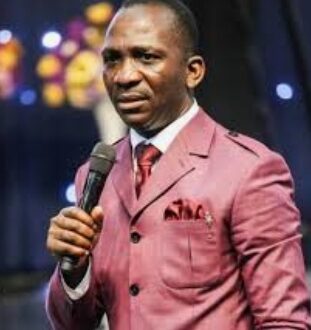 The man of God disclosed these at the Moshood Abiola National Stadium in Abuja in a fun day gymnastics competition organise by TIG.

He declared these at TIG International Assessment to assess the performance of gymnasts so that they can go to the. next level of the training.

Dunamis Gospel International Centreastor Enenche , his wife Becky Enenche and his Deborah Enenche were the invited guess of the event.

Enenche said parents should recognised the potential in their children.

She said parent should not force their children to do a particular course..

” I was talking to a child in secondary schools and her parents was telling her to do a particular courses because there was money in that course.

“Children should be allowed to do things they have passion for that is what will bring out excellent .

” They should not force them (children) rather they should study them , based on attitude and passion and let them be guided In that area and you will see excellent in that results,”he said

Enenche said he was happy to see Stephanie Onusiriuka displaying a wonderful performance as gold medalist.

” I have been so excited , as young as she is , she has started to impacted in the world of sports,” he said.

On his part , the founder of TIG Tony Asuquo said sport is fun and sport is addictive.

According to Asuquo over 200 participating in the fun day which couple with beauty pageant, dancing , gymnastics among others.

” We have to spice it up with beauty contests, Bouncing castle, we bought all the train ride, VR machine, and we just want the children to do sports at the same time and have fun.

“All the parents are very supportive , I want to actually thank you all the TIG mummy both Nigeria and abroad , this event will be done once in a year,”he said

“We have our summer camp which will last one month before going to South Africa.

“We have another competition in December is a National and that’s our plan and then we will wrap up the year,”he said

Stephanie Onusiriuka, the young gold medalist gymnast said her next target is to participate in the next Olympics in 2024 in Paris.

“I have learn double back lift and more other things , the next thing for me now is to concentrate and work hard for the South Africa Youth Championship.

“I will continue to train more on a daily basis so that I will qualify and participate in the next Olympics,”she said,” she said.

Onusiriuka won one gold, two silvers and one bronze. Making her the youngest Gymnast to win a Gold Medal in the National sports Festival in 2021.