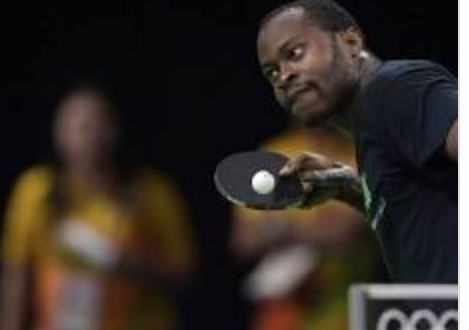 By Olayinka Elebute
Captain of Team Nigeria at the ongoing Tokyo 2020 Olympics, Aruna Quadri, has expressed his regrets  after his elimination from the table tennis event of the Games.
Quadri, who became Africa’s first table tennis player to play in the quarterfinals of the Games at Rio Olympics in Brazil, was knocked out in the third round at the Tokyo Games by Brazilian Gustavo Tsuboi, losing 4-2 (15-13, 9-11, 6-11, 11-7, 7-11, 6-11).
Much was expected from the Nigerian but he succumbed to the Brazilian who was lowly ranked to him.
“Without doubt, Sports Minister Dare has done a lot to change sports and athletes welfare in his short time,” Quadri said.
“His adopt an athlete initiative has impacted so much on many athletes. I feel disappointed I could not get a medal to say thank you,” Quadri added.
“That’s sports for you. I am a better player than my opponent in ranking but he played very much better to win. You know anyone in top 100 can spring a surprise at any time. I did not underrate him because we play in Bundesliga and I know what he’s capable of doing.”
“It’s not the end of life. We’ll continue to work to see what will happen in future.”
With his defeat, all Team Nigeria’s Table Tennis players have all been knocked out from the Tokyo Olympics.
Meanwhile, Egypt’s Omar Assar has equaled Quadri Aruna’s Olympic Games record as the second African player to reach the quarterfinal stage of the men’s singles table tennis event at Tokyo 2020 Olympic Games.
Assar continued with his good run with a close 4-3 (11-8, 6-11, 11-8, 7-11, 11-9, 5-11, 11-7) win over Chinese Taipei’s veteran Chih Yuan Chuang in the round of 16 tie of the men’s singles.
Share