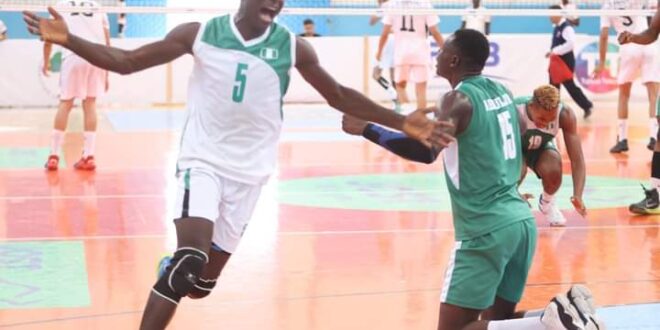 Editor August 19, 2022 Sports Comments Off on U-21 Volleyball Nations Championship: Nigeria In The  Semis after Win Over Libya 9 Views

Having recorded two wins against Morocco and Gambia as well as a loss to Tunisia in their group stage matches, the Nigeria U21 team knew a win against North African side Libya would send them through to the semi-finals of the competition.

Like in their second match against Gambia, the Nigerian side struck early taking the first set by 25-20 points the Libyan sent a clear signal to Nigeria winning 25-18 points. Nigeria middle blockers were kept busy throughout the third set and it paid off as Nigeria won 25-20 points.

Nigeria led in the early stage of the fourth set but Libya overtook the West African giants and won 25-22 points. It was a family affair in the fifth set before Nigeria took charge and won by 15-8 points.

An elated assistant coach of Nigeria U21 Team, Suleiman Ajeigbe revealed that they boys were not tense despite playing a five-set thriller in their quarterfinals match. 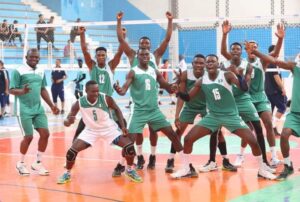 Ajeigbe said the team had worked extremely hard adding the boys were on top of their game.

He said, “I feel so happy, it was not an easy task but the boys were prepared and we ensured that they were on top of their game. The Libyans threw their weight at us but the boys gave their best; the morale is high ahead of our semifinal clash.

“There was no tension in the air when Libya levelled up in the fourth set; I kept telling them to give in their best because there must be a winner in the game. My head coach, Sani Mohammed in the fifth set strategized and had some pep talk with the boys; the last set came our way.

He said the Nigeria U21 Team intends returning to the country with the trophy stressing that they have the necessary support from the members of the Nigeria Volleyball Federation.

He said, “The Nigeria Volleyball Federation gave the team the necessary support before attending the Nations Championship so we had to make an excuse for not qualifying for the semifinals. The Libyans did not come to make the numbers here; I am certain that was why they wanted to upset us. By the grace of God, we want to return to Nigeria with the trophy.”