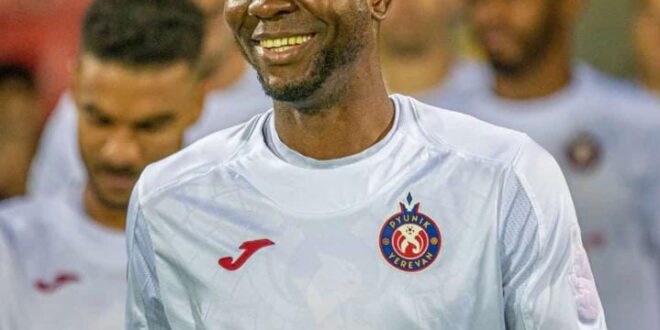 Former Nigerian under 17 striker Otubanjo Olaitan Yusuf has expressed his joy and excitement after winning the UEFA Europa conference League goal of the group stage.

Speaking from his base in Armenia, Otubanjo express his joy for winning the prestigious award. ” I don’t even know where to start from because i am so happy to have win this award. It’s a dream of every footballer to win and achieve great things like this. I want to thank everyone who made this possible. My teammate, coaches and the fans all over the world. I want to thank my family and Nigerians for there prayers and love shown to me by voting for me”.

” I want to assure everyone that I will keep working hard to win more” he said.

The 30-year-old, who has been in imperious form for his team following his free transfer from Ararat Armenia, on June 30, 2022, said it will be an honour to be called to the national team and show what he can do for his country as well.

“It will be an honor to be called up to the national team because it takes the grace of God to be nominated and win a UEFA award. My goal won “goal of the week” and also goal of the group stage.
I wish I had a call-up to show more of what I can do for my country as well,” said the erudite striker, who has scored six goals for his new team across all competitions this season.
Though Pyunik failed to make it out of the group after finishing third behind Slovan Bratislava and Basel, the competition is one to remember for Otubanjo, who started his professional career in 2009 with Julius Berger Football Club before he went on to play for Gateway United FC,Crown F.C., Atlético Madrid C,Red Bull Salzburg, FC Pasching, Blau-Weiß Linz, MŠK Žilina, Rheindorf Altach, LASK, Ararat-Armenia, and Pyunik.