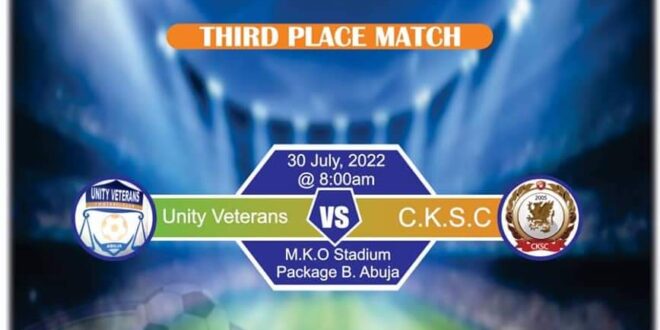 All Stars Abuja will be gunning for encore as they trade tackle with Unity Sports Foundation in the final of the second edition of Veterans Invitational Tournament in conjunction with Sports Writers Association, FCT chapter.

All Stars defeated USF one nil in a highly contested and controversial circumstances but all that will be laid to rest as USF have the opportunity of rewriting history when they hit the turf on Saturday, 30th of July, 2022 at FIFA Goal Project .

The match is expected to live up to expectations,and the hype around it after USF criticised some of the decisions taken by the referee in the first match but according to a player of USF Aruogu Ikemufula said the issues concerning officiating has been put behind them,however, the tournament has been quite interesting,tougher than he envisaged while the officiating has improved drastically after the first match.

‘we are looking forward to the final,we hope to take the game to the opponent and give them a run for their because if we want to win the tournament we should be ready to beat everybody and we not toying with that’

On the level of officiating,Ikemefula said ‘the officiating has been wholesome and he expects the same at the final but he however, warns the opponent to be ready for war’

The chairman of the organising committee and member of all stars Abuja, Desmond Ikwuje said the tournament has been able to achieve one of its cardinal objectives which is to bring unity, peace and togetherness among the veterans in the FCT .

He also said the competition has offered Captain’s if industry the opportunity to network and build camaraderie during the period of the championship.

in the second semi final corporate kickers sports club beat CKSC 2-1 to make it through to final.