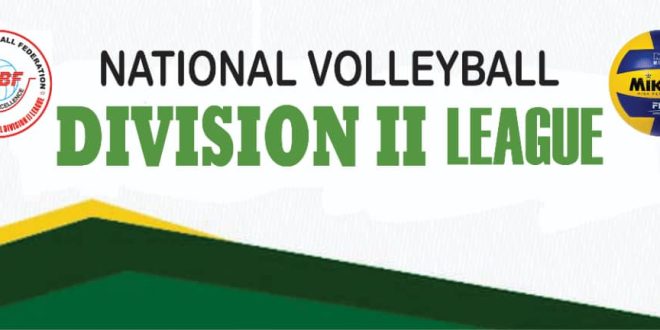 All is set for the National Division 2 Volleyball League in Jalingo, Taraba state at the Jolly Nyame Stadium, Jalingo from 22nd to 30th April, 2022.

According to DCP Stephen Hasso (RTD), North East Zonal Representative on the board of Nigeria Volleyball Federation, six men’s teams are expected to battle at the first phase of the Division 2 League.

He said the federation has put in modalities to ensure a successful Division 2 League is hosted in conjunction with Taraba State Government.

Hasso who doubles as the Chairman, Adamawa State Volleyball Association said, “The Nigeria Volleyball Federation is set for the Division 2 League. This is the baby of the federation; we are starting the league in Jalingo, Taraba state.

“This is the first phase and arrangements are in place for the successful hosting of this league. Six teams will begin hostilities today and you will see top class volleyball from these teams.

Hasso rated the facilities of the Jolly Nyame Stadium, Jalingo adding that the board will ensure age grade championships are hosted to keep the facilities in use.

He said, “As you can see, Jolly Nyame Stadium, Jalingo has one of the best sporting facilities in the country and the volleyball federation is ready to partner with the state government in ensuring more age grade and national championships are hosted here.”