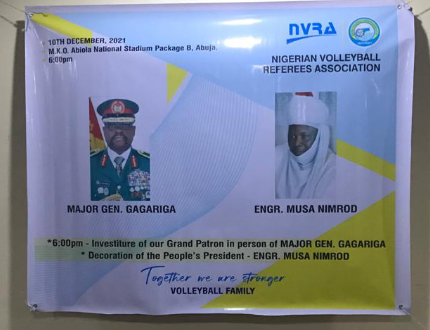 Volleyball: NVRA Decorates Nimrod For His Commitment To Volleyball

Editor1 December 11, 2021 Sports Comments Off on Volleyball: NVRA Decorates Nimrod For His Commitment To Volleyball 35 Views

The Nigeria Volleyball Referees Association (NVRA) has decorated two investitures stakeholders in volleyball for their contribution to the development, growth of the sport and humanity.

The awardees decorated are the President of Nigeria Volleyball Federation (NVBF), Musa Nimrod with ‘Decoration of the Peoples President and Maj.-Gen. Gagariga Taritimiye, a stakeholder in the Federation board, with ‘Investiture of our Grand Patron.’

Its Nigeria President, Simeon Ayodele, told Journalists at the end of its  Annual General Meeting (AGM), on Friday in Abuja, that the two awardees had tremendously invested to the grassroots development of volleyball.

Ayodele said the award was given due the development growth of the sport and toward the growth and development of humanity.

He said Nimrod the president of Federation has been working day and night to ensure the sport grow in every part the country.

“The decoration of the people president on Nimrod, we decorated today for his re-election as a president and congratulate him for the successful years to come.

“We also decorated major general Gagariga. He is our new grand patron. These are the two people we celebrated after our referees association AGM,” he said

He added that Major Gagariga have organised about two to three championships, adding that he was the chairman park volleyball.

“Park volleyball is street volleyball, we want to take volleyball to grassroots to every part of the country,” he said.

He said referees learn the new rules and regulations of the job which help them to have a wonderful officiating in the competition.

“Volleyball have new rules for every four years and the one on ground is from 2021 to 2024.

“We look into the modification to be apply into the premiership final coming and our Referees are refresh due to technical meeting we had today and we know we are set for the competition,” he said

He said also that the president of NVBF have charge the Refrees to be ups and downs.

He said Nimrod charged the referees to be diligent in discharging their duties without any favour in the tournament which will commence in two days time.

“Our business is to give free and fair officiating and we don’t have anything to do with any teams than to give fair officiate, to see that we see the best team win.