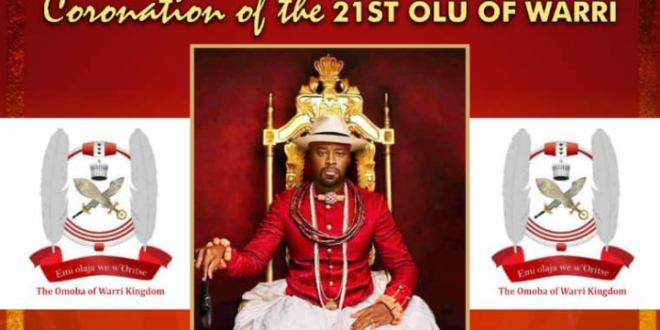 Editor1 August 16, 2021 Sports Comments Off on Warri Teams To Honour New Olu Of Warri In A Football Match 279 Views

It will be a celebration of football, fun and royalty as Friends of the new Olu of warri will honour one of their own Prince Tsola Emiko, the match which is slated for Thursday 19th of August will feature Chevron Football Club of Warri and Itsekiri National Youth Council Football club at the famous Nana College in Warri, Delta state.

Prince Tsola Emiko will be crowned the 21st Olu of Warri according to the organiser Prince Godstime Emiko who is also the chairman Sporting FC of Warri, “we are using these opportunity to show our happiness to one of our own who is stepping into kingship and since he love playing the game of football, we his friend are using this as away to appreciate him for loving the game and also to let him know that the community need him more in the future and his effort to see football grow in Warri environ and beyond” 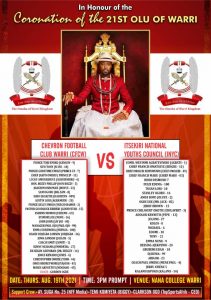 Also speaking soccer agent Paul Ojo Omamomo, is confidence his team Chevron football club will triumph over Itsekiri National Youth Council football team on Thursday, “we have been training hard and our team is without injury so we will have to win to demonstrate our love for the new Olu of Warri” he said.