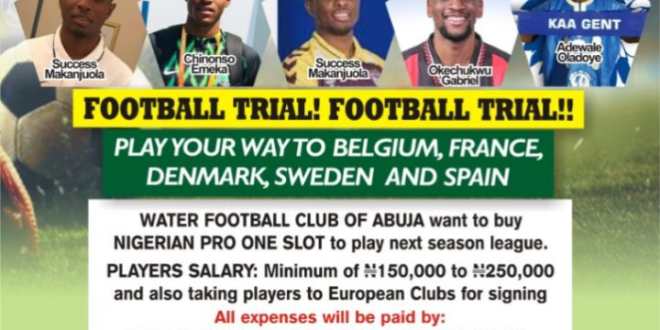 Water FC To Compete In NNL Next Season

Editor1 January 8, 2022 Sports Comments Off on Water FC To Compete In NNL Next Season 216 Views

All is now set for one of the leading Football Academies In Nigeria, *Water FC* to screen and scout for young and talented footballers to prosecute the proposed Amateur One League for 2022/2023 League Season and sponsor some for European clubs

The CEO Water FC, *Mr Makanjuola Nureni* who disclosed this to journalists said part of his plans is to give back to society and assist some exceptional talented players who have no agent yet to tmake their dream of playing abroad a reality.

The vastly experienced football administrator noted that the strategies is to capture Lagos, Makurdi,Abuja, Porthacourt and other parts of the country and breed professional footballers across the regions

The Abuja based football manager said the age bracket of the project is within 13-24 years and they will not pay a dime for the proposed trial. Also, the exceptionally brilliant ones would be sponsored and snapped up by European clubs

“The Water FC will hit Nigerian league this season as we are set to buy a Pro one slot for the year 2022/2023 league season. We are set to screen and scout for talented players that would be used to prosecute the next season while exceptionally brilliant ones would be made to sign for European clubs without paying a dime”

MK as the Proprietor is fondly called added that :” It is my dream to give back to the society particularly those young talented players who have no agent yet. I have spent more than 25 years in this business and our records speak. Let’s build more stars” .Makanjuola enthused

Water FC has players across European Leagues as some have made national teams cuts . the like of Babatunde Michael, Success Makanjuola, Okechukwu Gabriel, Chinonzo Emeka, Adewale Oladoye and others are being manage by Water FC and they are doing well at their various clubs