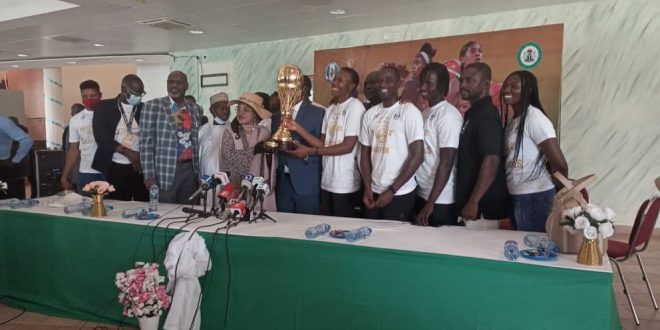 We Want To Continue To Dominate Africa…

Editor1 September 27, 2021 Sports Comments Off on We Want To Continue To Dominate Africa… 164 Views

Nigeria national women’s basketball team, D’Tigress, on Monday in Abuja said they will continue to win more laurels  for the country in forth coming continental Championship.

Nigeria overpower Mali 70-59 in the Final of the FIBA Women’s AfroBasket 2021 held in Yaounde, Cameroon on Sunday to retain the continental title for the third straight time.

Two outstanding players during the tournament (Akaraiwe Nkem and Mujanatu Musa) represented the team, who were received by the Minister of Youth and Sports development, Sunday Dare, at the package A of the Moshood Abiola National Stadium.

Akaraiwe Nkem, a shooting guard and also the sixth man in squad thanks the Minister Sunday Dare for bringing her back to sport after sustaining a career threatening injuries.

“I want to thank the sport Minister of Sports for bringing me back to Sports again and on behalf of the Sports family we want to say thank you, thanks you sir for your great support for the team,”she said

She said this is her second time participating with Nigeria team in AfroBasket Championship.

“I’m happy that we won the Afro basketball, the success was based on experience this is my second time appearance playing the afro basketball. I was there back in 2015, and we played like a team.

“It is a great privilege to play in the national team, and knowing fully well I’m just coming back to Sports after sustaining a major injury .

” I really appreciate every effort made on the board and from the coaches is a thing of gradual process.

” I know with time now that am fully back and have gained experience over there I’m happy,” she said.

She further added that she is not with any club presently now, I have just finished playing with my club in Spain hopefully I will go back to my club soon, “she  concluded.

The second player Mujanatu Musa, is a center in the squad ,she said very happy that that they brought back the trophy to the country.

“It is a great happiness for me to win the championship, and I’m very happy to bring back the trophy.

“It was a fight from day one, we just give our best in each game, it was a tough fight we thank God that we brought the cup back in Nigeria.