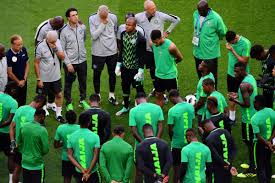 We Were Punished For Not Taking Our Chances Against Cameroon” – Rohr

Editor1 June 6, 2021 Sports Comments Off on We Were Punished For Not Taking Our Chances Against Cameroon” – Rohr 184 Views

By Editor
Technical adviser Gernot Rohr has played down Super Eagles defeat to Cameroon in an international friendly game played on Friday.
Super Eagles lost 1-0 to the Indomitable Lions of Cameroon in the first of the doubleheader game at the  Stadion Weiner Neustadt, Austria.
The Super Eagles dominated the game with Paul Onuachu and Moses Simon unlucky not to find the back of the net, just before Cameroon took the lead through Andre Anguissa.
The defeat end Nigeria’s recent good run against the Indomitable Lions, speaking to the media after the final whistle, Rohr insisted that he won’t lose a sleepover the result.
“The most important thing is not the result, it was a test match. So, it was very interesting to see some new players.”
“We missed 7 or 8 key players, of course, so we had to manage the situation, they did it well. We had 17 shots on goal while they only had 3. They had only one on target but it was the goal and we had six on target.”
The Franco-German also added that the players paid for not taking their chances in the game.
“Our domination was not good enough, not realistic enough because we had to score at the beginning of the game but we did not and when you don’t score very often you would concede.” He said.
Share