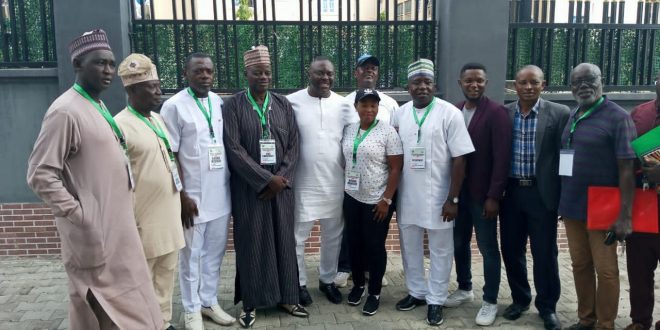 We Will Not Relent To Grow Football In FCT-Mouktar

Editor1 June 8, 2022 Sports Comments Off on We Will Not Relent To Grow Football In FCT-Mouktar 4 Views

He said that achievements of the FA have now become a template for other states who envy the growth of football in the city.

Mourktar who was represented at the event by the FCT FA Vice chairman Mr Kolo Salisu gave this assurance at the weekend in Abuja during the Annual General Meeting of the FCT Football Association where he rolled out numerous achievements of the association since they came on board.

He thanked all the stakeholders for their contributions towards the growth of football in the FCT and all the success recorded so far.

“We have become the envy of other states and hope it will continue as there is still much work to be done.

“FCT FA is one of a kind and we have all worked together to achieve a common goal which is Football development in all facets.

“From the grassroots competition to player’s welfare, coaches training and reforms for the referees here in the FCT, all in the bid to grow Football in the FCT to enviable heights.”

Highlighting some of the achievement so far, FCT Boss expressed that, the just concluded FCT FA league in its glitz and glamour where teams across came and participated to the excitement of the football loving fans in the FCT.

“The Bayern Munich coaches training that saw almost 20 coaches get good training from experts from a prestigious club like Bayern Munich and not forgetting the training of some of our coaches in the Nigeria Institute of Sports (NIS) here in Abuja.

“There is synergy between the referees and our association, to make sure the game grows positively.

Also, the Bwari mini stadium has been covered with an astroturf and the pitch will be ready for commissioning soon.

“Women’s leagues are not left out, the association is gender sensitive and we hope to grow our own state teams (both male and female) where they will compete against other teams favorably.”

In the interview after the AGM, Vice Chairman FCT FA Mr Salisu lamented lack of sponsors that forced the present board to be using their personal resources for football growth.

“We have a lot of challenges in FCT, we don’t have people with passion for football so, we don’t have sponsors, supporters, and we have been contacting so many organizations they are not responding.

“Secondly if you go to some state some state governments bought buses for their FA but for the FCT there is nothing like that.

He however, appealed to Nigerians to come and support the football in FC.