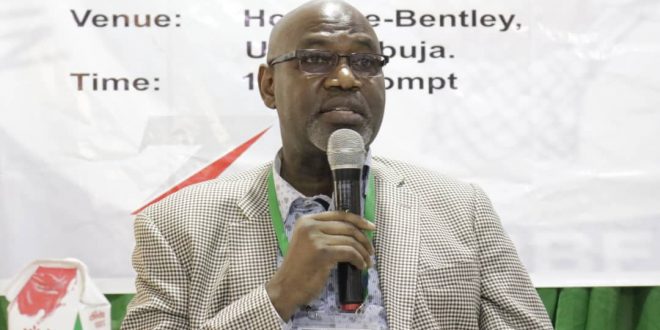 We Will Vote Out Kida In Benin…Players

Editor1 October 11, 2021 Sports Comments Off on We Will Vote Out Kida In Benin…Players 103 Views

The crisis trailing the re-election of Musa Kids as the president of the Nigeria Basketball Federation (NBBF) election as the former players of D’Tigers  has come out in one voice  to make sure the embattled NBBF caretaker committee chairman, Ahmed Musa Kida will not be at the helms of affair for the next four years as the president for the second term, with  the female basketball players (D’Tigress) joining their voice with their male counterpart crying out to Mr. President Muhammadu Buhari to help compel Kida to pay the money they are been owe for over four years now.

During the Annual General Meeting (AGM) of the NBBF held over the weekend, newly elected players representative into the board, Stanley Gumut said that he was given an observer tag to the congress despite his status as a board member.

Gamut however claimed that Kida insulted Basketball players who voted at the election by calling us, hoodlums and thugs in an election that was witnessed by various stakeholders and journalist last week Saturday he said.

He noted that the players he insulted will vote him out of office come October 30, 2021, in Benin-Edo state capital.

Also speaking in the same vein, former D’Tigers and NBA Star, Ejike Ugboaja and a former players representative in the last board did not take it likely with the embattled former president of NBBF sayin  that since Musa Kida has no regard for basketball players for whom he was the president, the players would have no option than to stop him from returning as the president of the NBBF.

Ejike noted that the players’ reps and technical election committee was set up by Kida, finance and monitored by him, but just that the players knew what they wanted and voted for their candidates who will represent them well, Kida during the congress last Saturday turned and tagged the players as ‘Thugs’ and ‘Hoodlums’

“For Musa Kida to call us the players in Nigeria who have represented the country and won laurels for the country in several tournaments as thugs and hoodlums is something we cannot take from him.” He said, “the players’ reps and the technical election held last Saturday where I was an observer and conducted by the electoral committee set up by Kida himself, why on earth would Kida call players ‘thugs and hoodlums?” he queried.

“It is because of the players he is there, so why should Kida insult us in the presence of everybody at the congress?

Meanwhile, D’Tigress in an interview with an online site threat end to boycott the World Cup qualifiers coming up in February on the ground that they are been owed backlogs of allowance and bonuses since 2017.

The players in one voice during the zoom meeting over the weekend accused Kida that he only comes around them to celebrate victories for his political gains.

According to them, “The only thing that will make honour the world cup qualifiers is when they pay our backlogs of bonuses and allowance, including Presidential visit to Aso Rock among others should be fulfilled by the federation and the Ministry of Sports before anything else.

The D’Tigress alleged that since 2017, they have been owed over N2 billion naira by Kida led NBBF. Also, wonder why they have not been allowing coming to Nigeria a situation they say was not helping them to mentor young Nigerians who want to play the game.

In his reaction, Kida denied calling basketball players hoodlums and thugs but confirmed that he said thugs invaded the venue of the election thereby caused violence.

“I didn’t say players were hoodlums and thugs, but I did say, there was violence at the venue of the said election.

“I did say they were thugs at the election venue last Saturday,” Kida said.