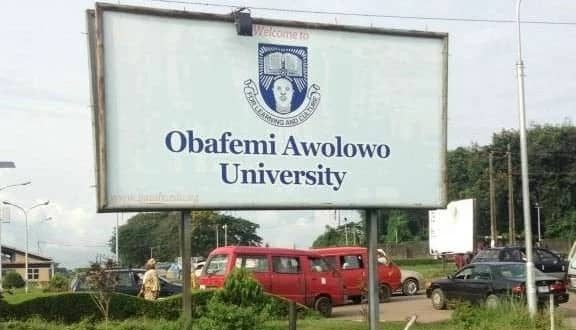 The Obafemi Awolowo University (OAU) says it didn’t dialogue with those protesting against the appointment of its new vice-chancellor (VC) because it doesn’t engage with touts.
Abiodun Olanrewaju, its PRO, spoke to TheCable Lifestyle on Thursday as normalcy returned to the institution’s campus.

On March 17, the university governing council, led by its chairman Owelle Oscar Udoji, had announced Adebayo Simeon Bamire, a professor of Agricultural Economics, as the 12th substantive VC of the varsity.

But locals in the varsity’s host community who favoured the installation of an Ife indigene had started a protest.
The protesters had shut OAU’s two major gates, preventing staff and students from either coming into or leaving the university.

It was gathered that the protesters came into the campus with fetish items. They were said to have assembled at the motion ground of the secretariat, dressed in all-white spiritual traditional attire, while chanting incantations as they performed rituals.

Olanrewaju said it was impossible to engage the locals as they disregarded processes in tabling their grievances.

“For now, no protest on campus. People and vehicles have been allowed to come in and go out. Everything is calm for now, let’s just put it at that. We’re not supposed to engage anybody because we don’t engage touts,” he said.

“There are procedures for doing things. Do you expect us to reason with those who are bringing charms and sacrifices to the university? No, we don’t do that. We won’t do that. We’re more enlightened than that.”

A students union executive at OAU, who also spoke with TheCable Lifestyle, confirmed that activities had returned to the campus.

“We no longer have protests on campus and there’s no longer any disruption. The protest stopped the day before yesterday at around 4:30 pm. The university has been on top of the matter,” the source said.

“The school deployed security operatives, both the DSS and the police headquarters in Osogbo, to heighten the security on the campus. This is although they couldn’t do much to totally stop the protest.”

The tension in OAU had come after Eyitope Ogunbodede, the former VC, was said to have been attacked over the varsity’s land-grabbing dispute with the host community.
“We do not have any issue with the people of Ife. The group that came are the ones who decided to do what they were doing. Ask one of them. Ours is a global university highly recognised internationally,” Olanrewaju had said.

“Their forefathers gave the land to us. It’s been there ever since. We cannot, on the alter on sentiments, jettison excellence and bring in mediocrity. Let’s not even use the word community in relation to the hostility.

“It’s only a few selfish people in that community that are against the university. It would be unfair on others to lump all the people of Ife with the greedy but vocal few who have been causing the controversy.”