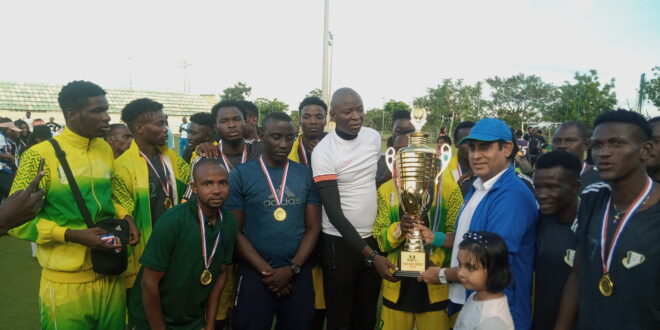 Linus Kelvin opened scoring for Kada Stars in the fourth minute of the game.

James Samailis scores the second goal in the 30 minute at the end of the first half to put his them on the better side.

Kada Stars fought hard to win all their game in the championship to win the league for the third time consecutively.

Speaking after the match , Nda-baba Abdullahi, the head coach of
Kada Stars said the league was tough compare to last season.

“We worked hard to earn this victory it is unfortunate that our female team could not top the table in the female category.

” We need to go back to the drawing board and work more to intensify our work so that we will have a better position at the Africa championship coming up next year.

“We need to work hard, we need to expose our players so they can make the country proud at the continental, “he said.

The captain of the team Victor Kish said they will continue to maintain the title as the defending champion for the next five years and more.

“Our target was to represent Nigeria at the continental championship, we thank God that we have achieve it.

The captain said the state government, Kaduna have been supporting the team with the necessary things they need to have a successful outing.

Both teams will represent Nigeria at the Africa Cup for Champions (ACCC) next year February in South Africa.

In the female category of the Super League, Delta Queens and Kada Queens will also represent Nigeria at the ACCC.

The total of 15 teams participating in the Super League this year.

Previous UFC: Minister Congratulates Israel Adesanya On Another Successful Title Defence
Next Why Peter Obi Should Accept To Be My Running Mate — Kwankwaso