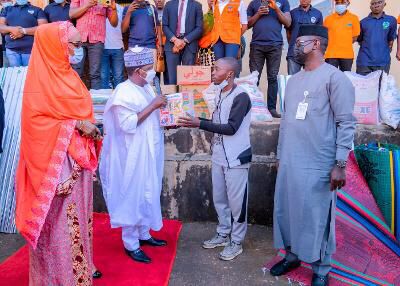 The Federal government has delivered food and non food items to the government of Plateau state for onward distribution to over 15,450 persons affected by communal crises in five local government councils of the state.

President Muhammadu Buhari, through the Ministry of Humanitarian Affairs, Disaster Management and Social Development approved food and non-food items distributed to the victims to  provide succour to the affected persons. 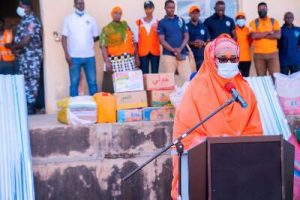 The Minister of Humanitarian Affairs, Disaster Management and Social Development Sadiya Umar Farouq, while handing over the items in Jos on Tuesday, thanked President Muhammad Buhari for promoting a people oriented agenda that seeks to reduce poverty in Nigeria and also
commiserated with the government and people of Plateau state following the loss of lives and property as a result of the communal unrest, banditry as well as religious and ethnic crises in Basra, Birnin Ladi, Riyom, Jos North and Jos East. 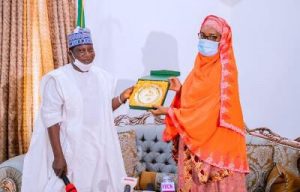 “I wish to use this medium to commiserate with the Governor and good people of Plateau State especially those in Jos North, Jost East, Birkin Ladi, Bassa and Riyom local government areas, over the loss of lives of their loved ones, their property and sources of livelihood due to communal clashes.

“The Federal Ministry of Humanitarian Affairs, Disaster Management and Social Development is currently pushing for a triple nexus track and approach that promotes
peace building as a crux to long lasting and sustainable development.

While humanitarian relief and aid can provide temporary relief, the goal is to ensure that vulnerable persons build resilience through access to social protection services and programmes.

“Following an assessment by the National Emergency Management Agency, NEMA, we found it pertinent to visit and to provide humanitarian relief to cushion the effects and to reduce vulnerabilities”. 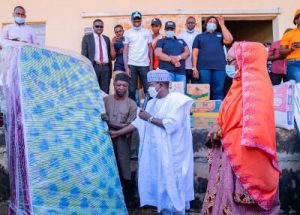 Responding, Governor Simon Bako Lalong thanked the minister for her prompt response after the Humanitarian crisis was reported to her. He also praised the President for the relief items while calling
on the Federal government to assist in the relocation and rehabilitation of Internally Displaced Persons affected by the crisis.

“The Vice President had promised us N10b to help in relocating the people back to their respective communities. We plead with you to help us follow up on that pledge as ten billion naira will go a long way in providing shelter for them to enable them to start life afresh and begin their farming,” the Governor said. 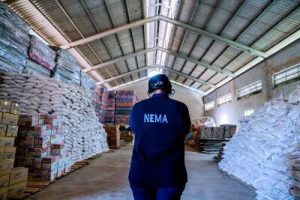 “Some attributes of the unfortunate
situation is the farmers/herders conflict. Lives have been lost in the nefarious attacks while crops and property were also destroyed.
A total of  about 15,450 persons were affected in the five local governments areas of the State.
“NEMA, saddled with the responsibility of responding to emergencies is to distribute the materials to affected persons”.