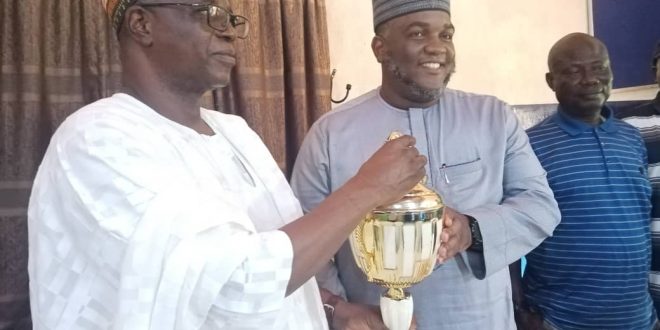 The FA boss made the pronouncement at the weekend when he received the Champions of the rejuvenated National Principals Cup, FOSLA Academy Karshi-Abuja in his office.

Alhaji Mohammed who also announced a cash gift of 500,000 naira to the Academy, said the partnership will in the areas of infrastructural development, talent enhancements and exposure among others.

Alhaji Mohammed commended the academy for winning the tournament and placing the FCT in the world map adding that he would partner with the academy in discovering and nuturing future stars to stardom.

“We at the FCT FA commended your efforts for winning the National Principal’s Cup and making the FCT proud, we would partner and support the academy in discovering,developing and promoting talents to stardom and also the coaches.

“Our doors are always open to support the academy, we also appreciate the efforts of the former NFF President, Alhaji Sani Lulu Abdullahi for his role in developing grassroots talent in the nation’s capital”.

Earlier, the founder of FOSLA Academy Alhaji Sani Lulu Abdullahi, applauded the FCT FA Chairman, for his gesture and also reaffirmed the academy’s commitment in the development of football in FCT.

Quoting his words, the former FCT Director of Sports said “On behalf of the management and students of FOSLA academy we appreciate the kind gestures of the leadership of the FCT FA, and we want to assure you that we will support your giant strides in the discovery and development of Football in FCT and Nigeria in general. He said that the Academy is ever ready to partner with various organizations to empower the indigent students in football and other sports”.

Fosla Academy is a foremost Academy in Nigeria where students combine education and football with many of them on scholarships to University level. Over 40 students from the Academy are studying various academic programs at the Nasarawa University, Keffi