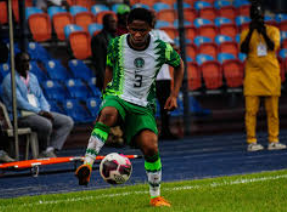 You Have A Bright Future Luiz Suarez Tells Dominion

Editor1 November 10, 2022 Sports Comments Off on You Have A Bright Future Luiz Suarez Tells Dominion 29 Views

The rising Profile of highly rated Nigeria Olympic Team Right Back Dominion Ohaka has continued to soar after another impressive display for Nigeria against Costa Rica in far away San Jose.

While the Coach Salisu Yusuf tutored side lost 2-0 , the Performance of the Nigerian squad was widely hailed and the team’s right full back  Ohaka Dominion was one of the standout performers.

And his performance did not go without the notice of the Costa Rican veteran Head Coach Luiz Fernando Suarez.

” It was a very good game and we played a very physical side and both teams gave a good showing”.

” Our opponent were very physical and also have some good players especially their right full back . He was very energetic and you can see that he is a very good young talent”.

The Colombian gaffer after the game took a picture with the young Water Fc Player , describing him as a future star for Nigeria.

The Player also cut the attention of many Costa Rican Journalists during their post match review , rating him as one of the team’s top players in the match.

Costa Rica is in Group E at the World Cup in Qatar alongside Germany , Japan and Spain .

They will open their campaign against Spain at the Al Thumama Stadium in Doha on the 23rd of November.

Previous FRSC Does Not Use Point Sales (POS) Machine To Receive Payment..
Next Obi’s investment for Anambra now worthless – Soludo